Orlando, FL, June 19, 2019 -- A reconfigurable “body-on-a-chip” model could transform drug development by simultaneously measuring compound efficacy and toxicity, for both target cells and other organs, such as the heart and liver. These findings, published in Science Translational Medicine, demonstrate the ability of a body-on-a-chip model to truly revolutionize biomedical research and personalized medicine through more accurate and efficient preclinical testing without the use of animal studies.

Florida biotech firm Hesperos, Inc., in collaboration with pharmaceutical giant Roche and the University of Central Florida (UCF), has shown that one of its innovative multi-organ in vitro (out of body) model systems is able to realistically replicate in vivo (in body) responses to anticancer therapies for both the parent drugs and their metabolites to determine therapeutic index for both single drugs and drug-drug combinations.

The therapeutic index measures relative safety of a drug and the range in which a drug dose is determined to have a therapeutic effect before significant toxicity begins to occur. The initial determination of efficacy at the same time can currently only be done at the preclinical stage in animals, and animal models are not always a good guide to how a drug will perform in humans.

“This is a game changer in the preclinical drug development process, which normally requires an animal model to measure therapeutic index, and in the case of many rare diseases requires testing in humans as there are no animal models available,” said Hesperos Chief Scientist James J. Hickman, who is a Professor at UCF’s NanoScience Technology Center. “In addition, our system will allow testing of different therapies on small samples of a specific cancer patient’s tissue to help inform doctors about which treatment works best for each individual.”

“With this system, medicinal chemists can test multiple variations of a drug candidate with milligram quantities of the compound, at the pre-animal stage. Normally to go into animals, scale-up needs to occur to manufacture grams to kilograms of a compound, which generally limits animal trials to one candidate because it is expensive,” stated CEO and President Michael Shuler, also Professor Emeritus at Cornell University.

As reported in the prestigious peer-reviewed scientific journal, the Hesperos team tested their device in two scenarios: on cancer-derived human bone marrow cell lines for anti-leukemia drug analysis, and on vulva and breast cancer cell lines to test multi-drug treatments in a multi-drug resistant cancer.

For both configurations, a body-on-a-chip system was developed with the capacity to house multiple human-derived organ-like tissue constructs grown on an array of biological microelectromechanical systems (bio-MEMS) modules in a single recirculating serum-free medium that allows non-invasive measurements of responses in the human surrogate.

For the leukemia model, two bone marrow components were incorporated with liver tissue to measure the cytostatic effects of two anticancer drugs -- diclofenac and imatinib -- on bone marrow–derived cells and off-target effects on the liver. Testing showed that liver viability was not affected by imatinib, but was reduced by 30% with diclofenac in the first configuration.

In the second configuration, one multi-drug resistant vulva cancer cell line and one breast cancer cell line without multi-drug resistance were incorporated into the system with a liver compartment to determine metabolic effects, and with functional cardiac models to measure electrical and mechanical deficits from off-target toxicity. The common breast cancer drug tamoxifen reduced viability of the breast cancer cells only after being processed by the liver. Tamoxifen did not affect the vulva cancer cells except when co-administered with verapamil, a permeability-glycoprotein (Pgp) inhibitor. Both tamoxifen alone and co-administration with verapamil produced off-target cardiac effects, as indicated by a reduction of contractile force, beat frequency, and conduction velocity, but did not affect viability.

These results were consistent with what has been reported in human trials. But they were done in a lab, without the need of animal studies and with no risk to humans.

Hesperos, Inc. is the first company spun out from the Tissue Chip Program at NCATS (National Center for Advancing Translational Sciences), which was established in 2011 to address the long timelines, steep costs and high failure rates associated with the drug development process. Hesperos currently is funded through NCATS’ Small Business Innovation Research program to undertake these studies and make tissue chips technology available as a service based company.

“One of the many uses of tissue chip technology is to make clinically relevant assessments of the effectiveness of candidate drugs,” said Danilo Tagle, Ph.D., associate director for special initiatives at NCATS.

The ability of these systems to assess cardiac function non-invasively and monitor biomarkers over time, using multiplexed and repeat drug dosage regimes, provides an opportunity to run long-term studies for chronic administration of cancer drugs or drug-drug combinations.

Hesperos, Inc. is a leader in efforts to characterize an individual’s biology with human-on-a-chip microfluidic systems. Founders Michael L. Shuler and James J. Hickman have been at the forefront of every major scientific discovery in this realm, from individual organ-on-a-chip constructs to fully functional, interconnected multi-organ systems. With a mission to revolutionize toxicology testing as well as efficacy evaluation for drug discovery, the company has created pumpless platforms with serum-free cellular mediums that allow multi-organ system communication and integrated computational PKPD modeling of live physiological responses utilizing functional readouts from neurons, cardiac, muscle, barrier tissues and neuromuscular junctions as well as responses from liver, pancreas and barrier tissues. Created from human stem cells, the fully human systems are the first in vitro solutions that accurately utilize in vitro systems to predict in vivo functions without the use of animal models, as featured in Science. More information is available at Hesperosinc.com 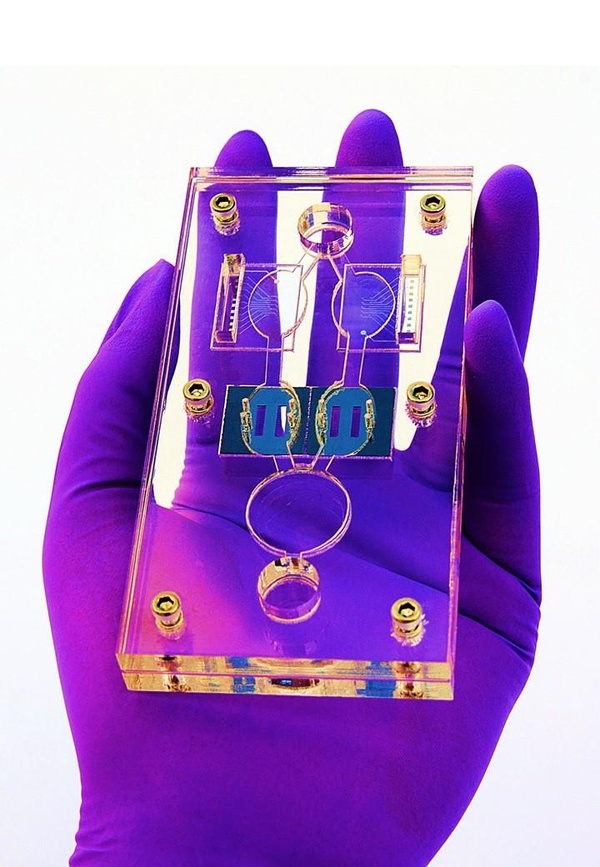 Hesperos’s reconfigurable human-based body-on-a-chip system mimics the way human organs interact with each other and respond to drug testing. 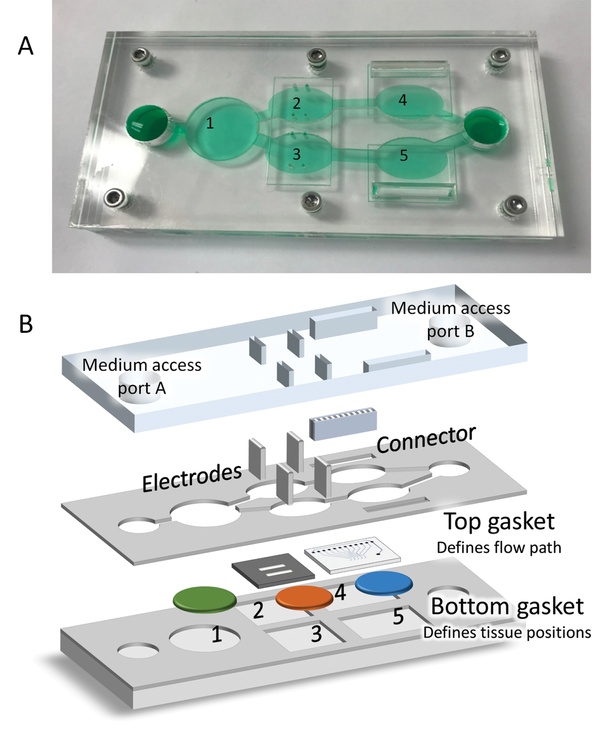 Hesperos' microfluidic Human-on-a-Chip® system is compact and reconfigurable, and can contain up to five tissues in the system, in a serum free, recirculating medium utilizing a pumpless platform. 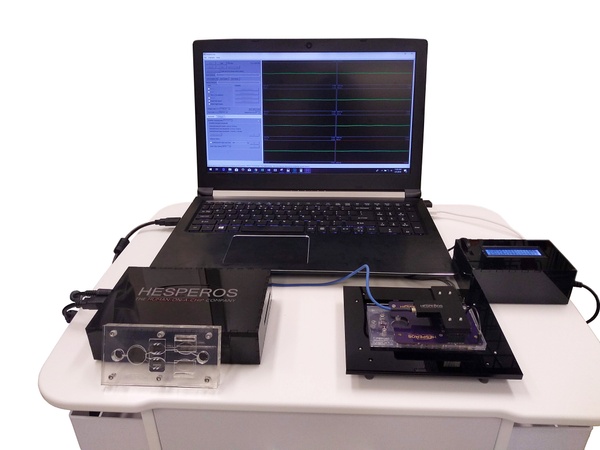 Related Bios
https://cdn.filestackcontent.com/dnmTi1BQZyxfnRRnADDX?dl=true
https://cdn.filestackcontent.com/AG3wH2AR3SP2Mo58NZitaz/rotate=exif:true/resize=width:600/dnmTi1BQZyxfnRRnADDX
The driving vision of Dr. James (“J”) Hickman is fundamental to Hesperos’ technological “Human-on-a-Chip” platform. He published the first serum-free, defined culture system for neuronal systems in 1995 (Schaffner, Barker et al. 1995) and has now extended this from rat to mouse, both embryonic and adult, as well as to human. J has also pioneered the establishment of functional in vitro systems and was one of the first to report toxicity studies from neurons on microelectrode arrays in a defined system back in the 90’s (Jung, Cuttino et al. 1998).

He has extended these defined in vitro systems now to cardiac, muscle, glia, endothelial, hepatocytes bone marrow, cancer, and epithelial cells. In most cases, the cells have been shown to survive at least 2-3 months in this system while maintaining full functionality.

His work developed a common media system, which supports a wide variety of cells, thus, establishing a common media system for multiple cell types with a high degree of test/retest reliability essential to commercial utility. J received his Ph.D. from the Massachusetts Institute of Technology (Chemistry), his M.S. and B.A. from Penn State, he was elected to the Board of Directors of the American Institute for Medical and Biological Engineers (AIMBE), the premier society for Biomedical Engineering of which he is a Fellow.

Dr. Hickman is the sole or co-inventor on multiple pending and issued U.S. and international patents. He has presented over 135 invited presentations with more than 160 total presentations, as well as over 100 publications and 17 book chapters, in addition to 16 patents. 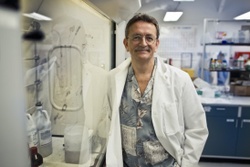 James Hickman, Ph.D.
Chief Scientist
View Full Bio>>
https://cdn.filestackcontent.com/v5vmTXIdRxqVaxa9Ecb0?dl=true
https://cdn.filestackcontent.com/AG3wH2AR3SP2Mo58NZitaz/rotate=exif:true/resize=width:600/v5vmTXIdRxqVaxa9Ecb0
Dr. Shuler has over 25 years of experience in Body-on-a-Chip research and helped to define the field itself. He has made numerous technological improvements to the basic concept (e.g. use of 3-D tissue constructs and a pumpless system) that have made this more practical for adoption in pharmacological research and form the intellectual framework for Hesperos’ services.

Dr. Shuler is the founding chair for the Department of Biomedical Engineering at Cornell University, and has served as the James and Marsha McCormick Chair of Biomedical Engineering. Mike graduated with a Ph.D. in Chemical Engineering from the University of Minnesota and a B.S. from the University of Notre Dame. He has received numerous research related awards, among his honors is election to the National Academy of Engineering (1989) and the American Academy of Arts and Sciences (1996) and he has published over 300 peer reviewed journal articles of which over 70 focus on in vitro toxicology and pharmacology (Body-on-a-Chip). Dr. Shuler is the sole or co-inventor on multiple pending and issued U.S. and international patents. 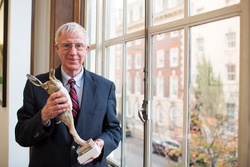